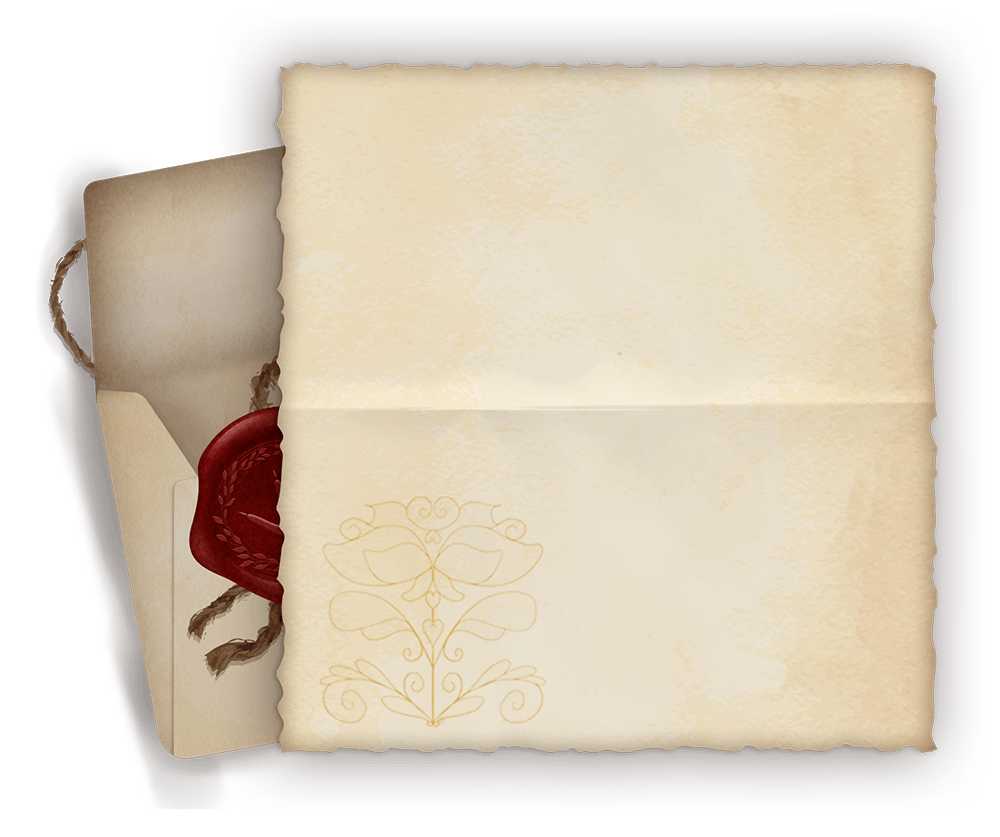 Wax your whiskers and straighten your tails, for you are hearby invited to the Royal Scavenger Hunt! Gather your team and hop and shove your way to glory! BUT, mind your scavenger hunt card, for these items may be worth extra prizes once the clock strikes midnight! We will also have a chain climbing race for the little ones.

The event begins at 7 p.m. SHARP. Dress is smart casual. A meal of sweet berries will be served for each item delivered.

P.S. I seem to have misplaced my regal relics again. If you find them I'll give you something special! 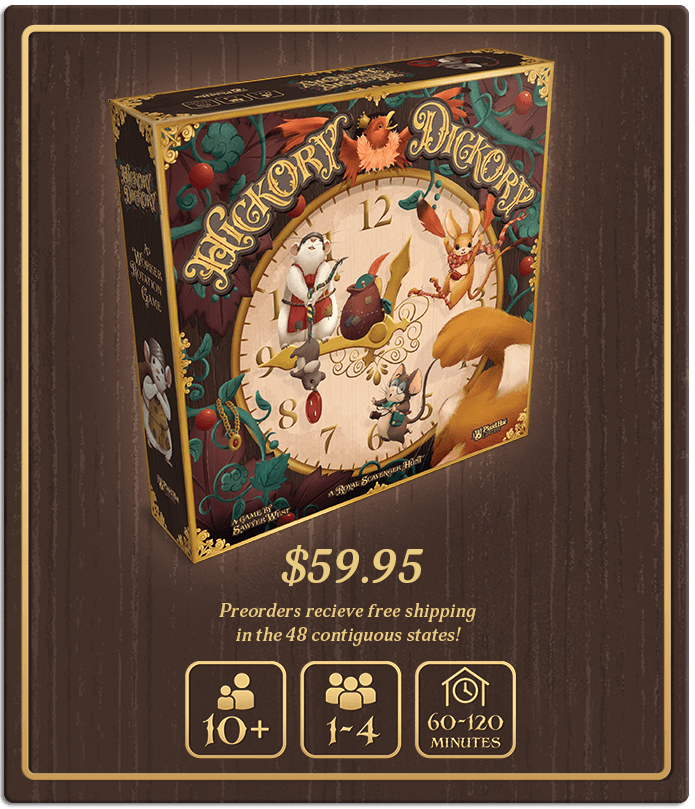 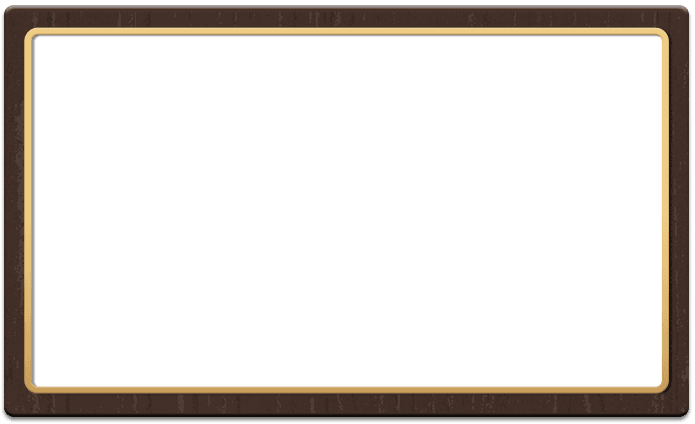 Welcome to the Royal Scavenger Hunt!

In Hickory Dickory, you will play as a team of mice competing to collect tiles, climb the cuckoo clock weights, find royal relics and complete quests to gain the favor of the all-powerful Lord Cuckoo and ultimately win a feast of berries in your honor!

Players will do this by having their mice ride around the clock on the minute hand as it ticks from space to space. On each space the mice on the hand will get the chance to hop off the tip of the minute hand and take that space's designated ACTION while collecting revealed item tokens from that space.

The mice who were already patiently waiting on that space will get the chance to either stay where they are and take that space's action, or hop onto the rear of the minute hand before it ticks forward once more.

But be careful! If a mouse hops on to the hand, and there isn't room for more mice, the mouse on the front of the hand will be bumped off, forcing them to take an action they may not have wanted.

Clock spaces include a variety of actions mice can perform, and FAVOR cards offer the potential for unexpected surprises.

Finding tiles you need for your scavenger hunt card. Each row and column completed at game's end will earn players 5 points. Delivered tiles that aren't on your hunt card still earn points, they just don't get added to your hunt card for end game points.

Racing to the top of the chain weights. The faster your scaler mouse climbs, the more victory points they'll gain.

Taking advantage of quests and relics. Each relic returned to Lord Cuckoo at the 12 space earns that player 5 VP and one favor card. Quests net either 5 or 7 VP.

The mice who manage both their time and the space in their bags most effectively will score the most victory points and find themselves invited to a feast with Lord Cuckoo himself! 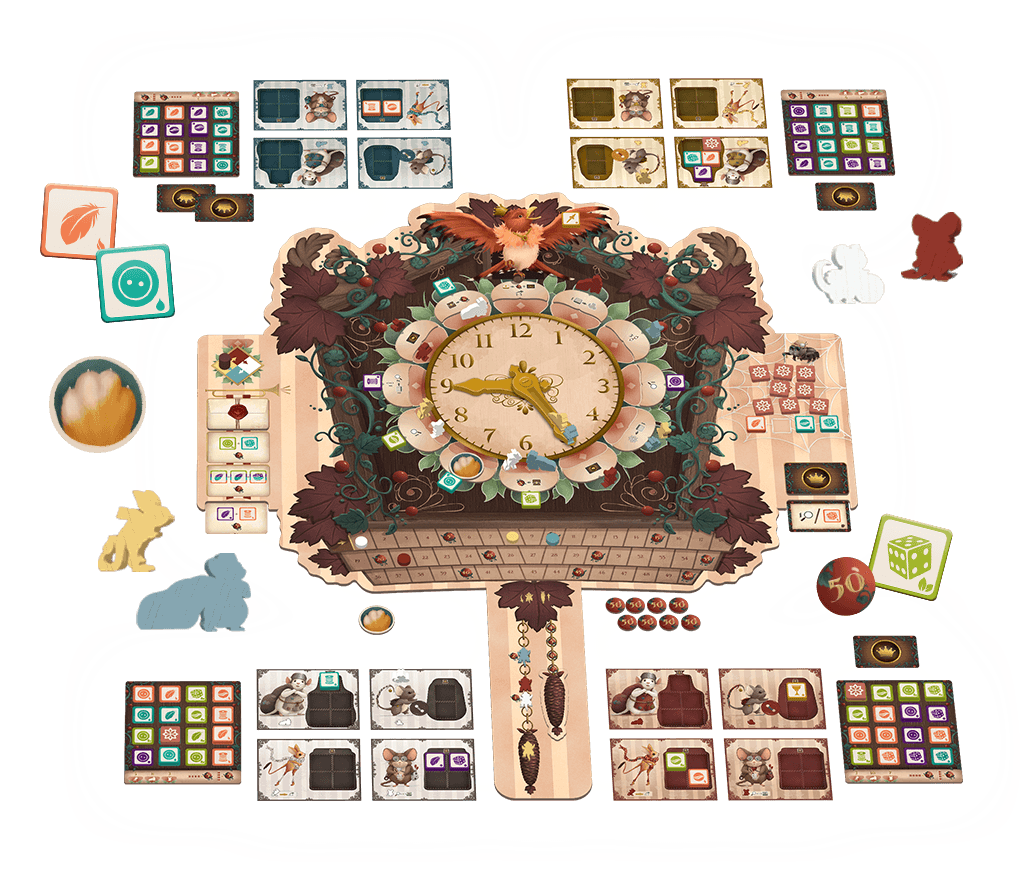 Can hold one extra item tiile in bag, but takes up two spaces on minute hand.

Can jump up to two spaces forward off the minute hand.

Pulls an extra tile from the search bag and chooses which to keep.

Can teleport across the board, but can only hold two tiles.

At the beginning of the game, each player will be dealt a random hunt board. These boards show the starting setup for that player's mice and what item tiles they will need to collect in order to score additional points at the end of the game. Once tiles have been placed into the hunt board, they are set in that location for the rest of the game. No picking up and moving tiles at will!

Players will earn 5 victory points for each completed row and column at the end of the game.

Each clock space will have an action tile that players can jump onto to perform that action. Some of these tiles have set spaces where they must go, while others are laid out randomly at the start of the game.

Spend one tile to gain/teleport your Scamp.

Climb 3 spaces on the chain.

Claim 1 tile from the bag.

Spend one tile to visit the market.

Climb 1 space on the chain. Then, you may spend 1 tile to claim 2 tiles from the bag.

Climb 2 spaces on the chain. Then, you may spend 2 tiles to visit the market.

Return your mouse's relics, scoring 5 victory points and drawing a favor card for each. Then, leap to the 1, 2 or 3 outer ring space.

Jump your mouse to a favor card space to collect cards that allow you a special effect OR use the tile listed for item delivery points, completing quests, or paying action costs.

Players may have a maximum of two favor cards in their hand at any time and they are hidden from other players. 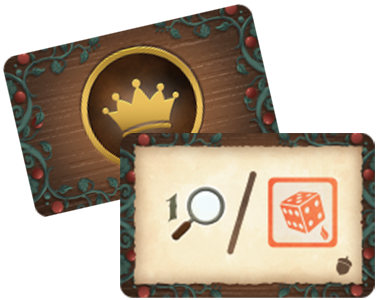 Lord Cuckoo has special wants and needs! Two cuckoo quests will be available at each hour for players to claim while delivering items. 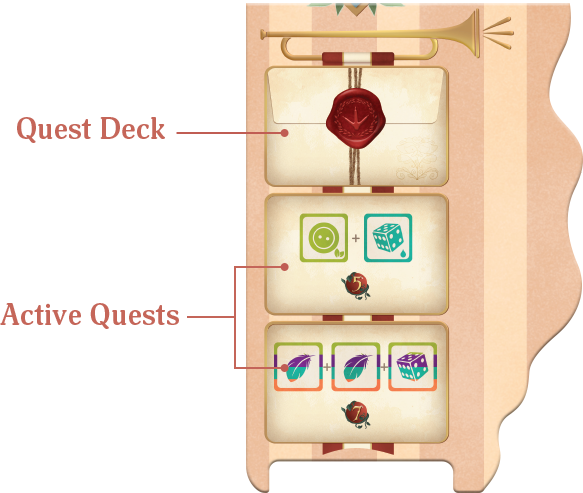 Players must deliver the items listed on the quest at the 6 or 11 space in order to claim and score victory points for the quests. Once claimed, the quest will be discarded, and a new one will take its place once the minute hand hits 12 and a new hour begins.

A player who delivers a green button and blue die at a deliver action space can claim this quest and receive 5 additional victory points.

The lovely shopkeeper Itsy Bitsy runs the only shop in Tockton Cuckoo Clock, and her prices are quite fair. Players who visit the market spider-web icon have the choice between gaining two item tiles from Itsy's discount bin or taking one wild tile from her web. Wilds count as every color and all items at once. 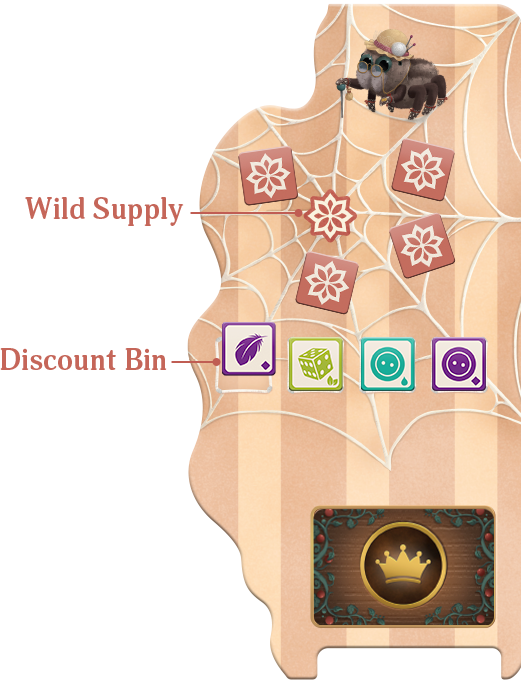 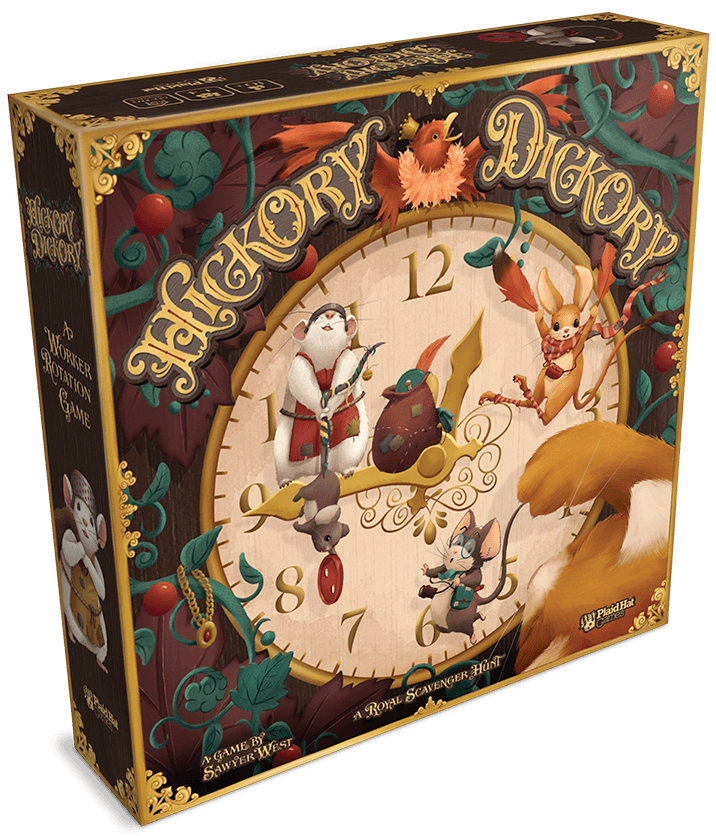 Pre-order your copy of Hickory Dickory directly from Plaid Hat Games to receive a full-colored magnet sheet featuring all the adorable characters! 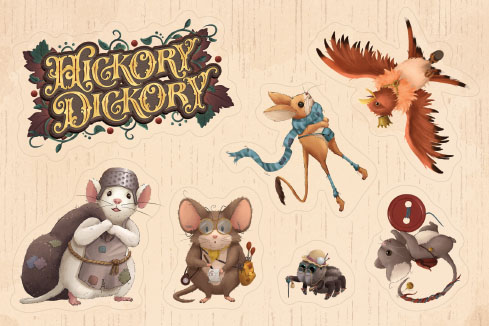 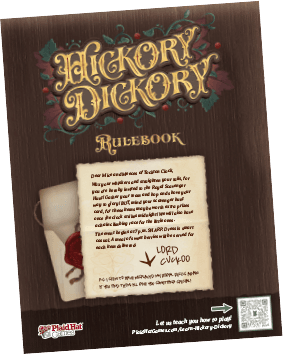 How to Play and Preview Videos 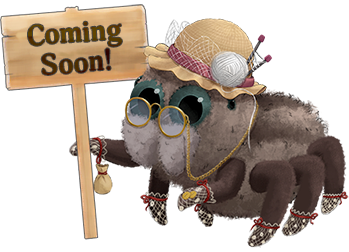 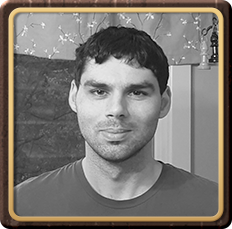 Sawyer West had thought little of board games until he was taught the game of chess by his grandpa. He loved it so much that he continued to learn chess and any other chess-like game he could find. Years later in 2011, Sawyer was introduced to Eurogames and fell in love with the strategy and math. After graduating college in 2015, Sawyer had so much free time on the job hunt that he decided to design a Eurogame of his own to fill the void. Today, Sawyer continues to live his life by the chess lessons he learned when he was young, designs board games in his spare time and enjoys every moment of it. 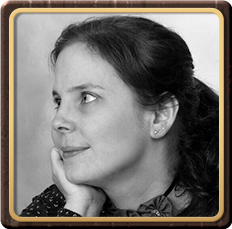 Sonja Müller is an illustrator from Germany also known under her artist name Holumpa. She always had a great passion for imaginative stories and a deep love for animals and nature.

Diving into the adventurous scavenger hunt of the brave and funny mice of Hickory Dickory was right up her alley. She immediately fell in love with the game and loved working on it every tick. 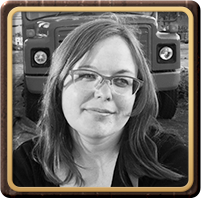 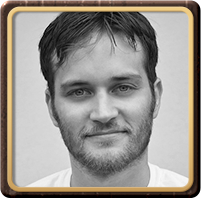 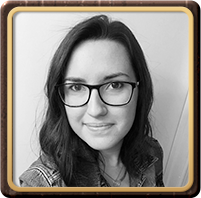 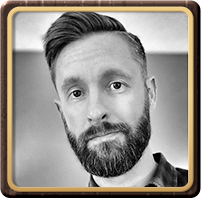 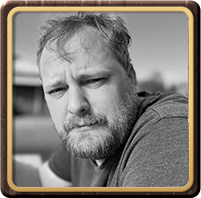 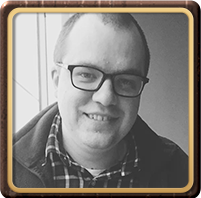 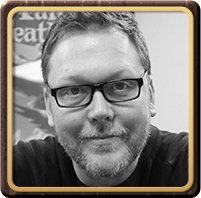 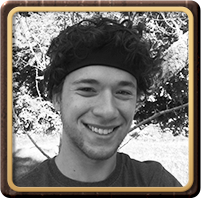 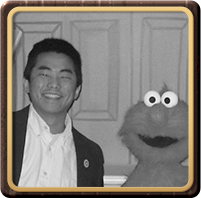 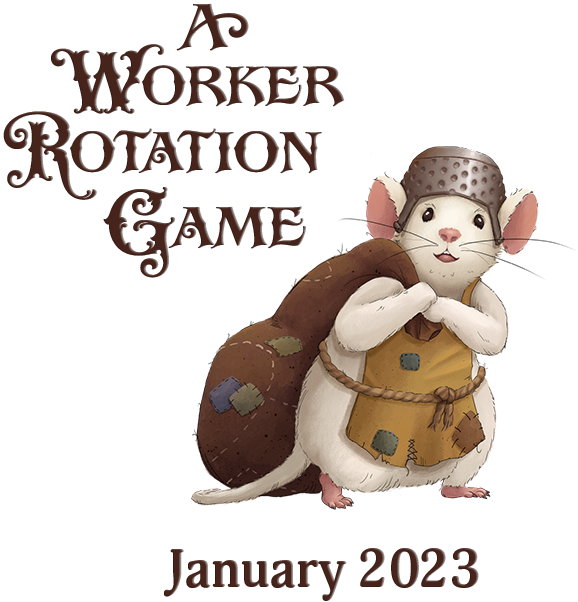